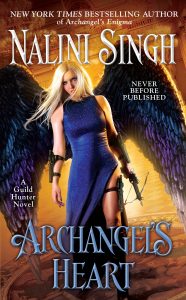 Raphael’s response was silent, his wing brushing hers as he . . .

“Raphael!” The damn archangel had dusted her.

Glittering, sparkly stuff stuck to her, delicious beyond compare when she parted her mouth and it licked onto her tongue. Her thighs clenched. “This is not funny!” She glared at him even as arousal flooded her system, but he was laughing too hard to care.

Her heart, it just stopped.

Even now, the Archangel of New York rarely laughed and never like this. Until she could see the youth he must’ve once been, with eyes of a wild, astonishing blue that asked a woman to laugh with him. She’d never before seen him as truly young. How could she? He had so much power that it pulsed in his every touch, burned in his skin.

Hauling him close to her with her hands fisted in the cream linen of his shirt, she took a kiss, took him. He sank into her, his wings sweeping up to wrap around her until all she could sense was Raphael, all she could taste was him. And angel dust. The special blend he’d created just for her.

Elena loved that simple piece Honor had found in a thrift shop, but right now, it could’ve been a priceless artwork by the Hummingbird and she wouldn’t have cared. She was far too happy to be pressed up against the hard warmth of her archangel tip to toe after spending the previous night on watch. No time for shenanigans with Dmitri away and Illium off-shift, Aodhan assigned to patrol the sea border, and Raphael dealing with the overall security situation.

She’d flown a proper defense grid, both to stay in practice and because none of them could afford to be blasé with the Cascade an unpredictable foe that could unleash itself at any moment, smashing the world back into chaos and, possibly, war.

Today, however, the others were on‑shift and she could kiss her lover. He burned hot, Raphael, but he was a crashing sea in her mind, a tumultuous, passionate storm that swept her up and thundered through her veins.

We can talk to Dmitri later, she sent to Raphael, sliding her hands up the ridges and valleys of his chest. Let’s go upstairs to our suite.

She tried to ignore that pointed cough that held a biting amusement.

Raphael’s lips smiled against hers. I think my second has other ideas.

Posted by arrangement with Berkley, a member of Penguin Group (USA) LLC, A Penguin