I received this book for free from Netgalley in order to prepare an honest review. This does not affect my opinion of the book or the content of my review. 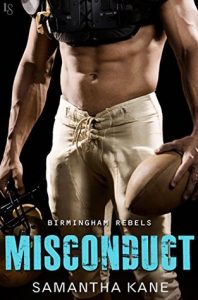 FINAL DECISION:  This was an enjoyable story and one that was well balanced in the relationship between the three characters.  Both the connection between them in pairs and as a menage worked here.

THE STORY:  Running back Tom Kelly wants a committed three way relationship (and there are several in the Birmingham Rebels organization). Carmina de la Cruz is the woman Tom would like to have as part of the relationship.  Carmina is an Army vet trying to recover from a tour in Afghanistan that resulted in a traumatic brain injury. Tom’s interest helps Carmina feel desired again, but she also has an interest in Tom’s teammate and friend Danny Smith.  Danny knows that the Rebels have a certain reputation, but he has no interest in pursuing a threesome relationship after being burned before.  But Tom and Carmina are awfully tempting.

Danny is a man who has been haunted by his actions in relation to his friend and allowing his own career to take precedence over an attempted sexual assault upon her. He believes himself unworthy of happiness and thinks about revenge instead. He is also a man who is struggling against his potential bisexuality.  He has a darker past and struggles more against the menage relationship.

Carmina is a strong woman who is struggling against both her physical and emotional injuries. Her inability to find sexual satisfaction after her accident is part of the catalyst for the relationship.

I liked how these three work through their issues and also need to figure out if and how a relationship can work between them. It’s nice that they don’t take it for granted that things will work out between them.  There are also issues of jealousy and uncertainty that are raised which seem natural.

I also really enjoyed that this book came full circle from the first in the series by resolving the lingering issues and helping close Danny’s issues surrounding the events. I’m not sure whether there will be other books in the series, but this book could be a nice concluding story.

WORTH MENTIONING:  This is a menage story featuring three people working toward a long term relationship.

CONNECTED BOOKS:  MISCONDUCT is the fourth book in the Birmingham Rebels series.  This book can be read as a standalone but it is connected with BROKEN PLAY and tells a connecting story to the heroine’s past there.

STAR RATING: I give this book 4 stars.

NOTE:  I received an ARC of this book via Netgalley in order to provide a review.  I was not required to write a review or write a positive review.  All opinions contained herein are my own.