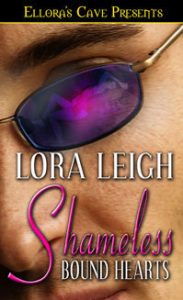 FINAL DECISION: This book has plenty of hot sex (expected in a Bound Hearts novel) but I didn’t feel the intense connection between the characters that I expected and I really didn’t get Ian’s reluctance.  The book was good, but I have read better in this series.

THE STORY:  Courtney Mattlaw has wanted Ian Sinclair since she was mere child.  Now she has decided to get the man she wants.  Ian has tried to protect Courtney from his wild extreme sexual lifestyle. What he doesn’t know is that Courtney is not the innocent that he thinks she is and she wants nothing less than to be a part of Ian’s life in all ways.

OPINION:  The Bound Hearts series has more extreme sexual relationships including an emphasis on menage.  This book is no different.  The central conflict in this book is that Ian thinks Courtney is too innocent and because of a woman in his past who committed suicide and blamed his lifestyle, Ian doesn’t want to be responsible for Courtney.

This book is smoking hot because Courtney is determined that Ian see her as a woman who is compatible with his sexual needs and thus the two are engaged in some seriously intense sexual acts.  That part of this book would definitely get 5 stars. I liked how Ian and Courtney challenge one another and they have a very sexy confrontational relationship.

There were two things about this book that bothered me.  First, I never really got that Ian fought so much against Courtney.  In the beginning that made sense, but once the two were engaged in a sexual relationship, I couldn’t buy that Ian kept thinking that Courtney was some delicate flower.  At that point, his objections just didn’t seem rational.  Second, and perhaps because of that, I didn’t get the emotional connection between these characters. Their conflicts seemed more forced and thus I felt there was less emotional intimacy.

This was a good book, but only average for this series.

WORTH MENTIONING:  This book contains the heroine having sex with another man, some minor FF, and MMF menage.

CONNECTED BOOKS:  SHAMELESS is the seventh book in the Bound Hearts series.  This book can be read as a standalone although there are appearances by characters in the series.  I’ve been reading these out of order and I haven’t had a problem.