This is an anthology of four short stories with a Christmas theme. The stories are not connected to one another (other than a recipe for a special shortbread and the holiday theme) so each can be read on its own.

MEET ME IN MAYFAIR by Tessa Dare: Louisa Ward has one night to catch the eye of a wealthy gentleman and only weeks to convince him to marry her before her family will be evicted from their home by the Duke of Thorndale. A turn of fate, however, puts Thorndale in Louisa’s path.  I enjoyed this one because the hours the couple end up spending together which felt sweet and romantic. Although the story is short, I did get the connection between the characters. The story is also funny at times, as it is a series of adventures and misadventures. I enjoyed this one. Rating: 4 stars.

THE DUKE OF CHRISTMAS PRESENT by Sarah MacLean: Eben, Duke of Allryd is obsessed with work and his wealth. Twelve years ago, this obsession led to the love of his life leaving him. Now the ghost of Christmas past has returned to Eben in the form of Lady Jacqueline Mosby. This is a wonderful adaption of A Christmas Carol (but with a happy ending for the romance). Eben is a sad, lonely man but is not a bad person. He is a man who focused on saving his dukedom from financial ruin and yet forgot to include the woman that he loved. I loved the relationship between Eben and Jack which was sweet and so perfect and I grieved as Eben let it slip away until Jack left as well. Then Jack returns and ends up saving Eben from himself. This is the best of this anthology and a Christmas romance that I will return to again. Rating: 5 stars.

HEIRESS ALONE by Sophie Jordan: Annis Bannister is mistakenly left home alone by her family. When her Duke neighbor comes to rescue the servants from a roving band of thieves, Annis is forced to seek refuge with him as well. This one was just okay for me. I never really felt a connection between the characters and thus the quick progression in their relationship didn’t work for me. The hero always felt indistinct to me and thus I couldn’t really understand his connection with the heroine. Rating: 2.5 stars.

CHRISTMAS IN CENTRAL PARK by Joanna Shupe: Rose writes a column as Mrs. Walker who gives advice on households and cooking. Rose, however, is not married, doesn’t have a house and certainly can’t cook. When the newspaper’s owner, Duke Havemeyer, requests that Rose host a Christmas party at her home, Rose has to acquire a house, a husband and the ability to cook a dinner. The problem is that a “married” woman shouldn’t be so interested in her boss.  This one was mixed for me. I thought the setup was really good and things went well until the dinner party. Once that was over, the entire resolution was so quick that I didn’t feel it was in characters with the rest of the story. I was disappointed in that because I thought the beginning of the story was so interesting that I would have liked something better than Rose making demands and the hero just giving in to her. Rating: 3.5 stars.

FINAL DECISION:  Enjoyable and very, very funny historical.  A book that rifts on Beauty and the Beast with a heroine who doesn’t take any gruff from the hero but instead challenges him out of his moody self-absorption.

THE STORY:  Emma Gladstone, a vicar’s daughter ruined and come to London as a seamstress comes to the home of the Duke of Ashbury to get payment for a wedding dress she created for his cancelled betrothal.  Ash returned from war horribly scarred, but he decides that Emma meets all his requirements for a wife.  Ash has some requirements for their marriage of convenience.  He will bed her every night until she conceives, with no kissing, and then she will leave and raise their child in the country.  Emma, however, is determined to bring Ash back into the world and has her own demands — which begin with nightly dinner and conversation.

OPINION:  I enjoyed this book because Emma refused to allow Ash to wallow in his pity party. From the beginning, she sees herself as an equal and pulls him into relationship.  While having her own fears and past pain, she almost immediately sees Ash as someone of worth. I admire a woman who has her own internal scars but lives her life with purpose and without complaint.  And she is an optimist with hope who teases her husband with silly nicknames and her refusal to just leave him alone.

Ash is a man with horrible scars, but his deepest scars are emotional.  Born and raised in his privileged position as rich and handsome, he doesn’t quite know how to function in a world where people look at his face and are horrified.  Instead of trying to change people’s minds, he has instead embraced the worst of his fears to cope.  Better that he call himself a monster, be a monster, act like a monster.  That way he can avoid the pain of rejection.

I thought the story was well done.  Many would rate this book higher. The reason I gave it a very good 4 is that I think that the humor at times deflected the serious notes in the story.  I think I just prefer a darker more serious story.  I like humorous stories and I really liked this one, but I sometimes felt that the story could have gone deeper than it really wanted to.  That being said, I thought this book was very enjoyable and recommend it especially for those who like humorous historicals.

WORTH MENTIONING:  Emma meets three “original” women who might just be the heroines of future stories.

CONNECTED BOOKS:  THE DUCHESS DEAL is the first book in the Girl Meets Duke series. 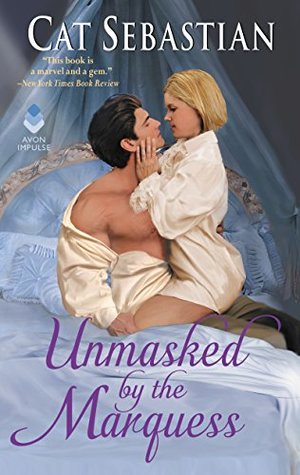